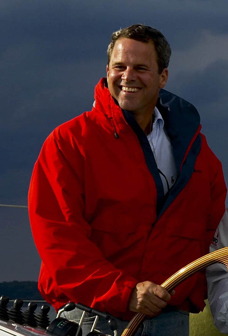 Read about Ted Fontaine in issue 78 of the Yacht Report

Established in 2001, Fontaine Design Group is among the world’s elite designers of large custom sailing yachts. Specializing in shallow draft, wide beam, deep centerboard hull forms, Ted Fontaine’s high performance, comfortable racing/cruising yachts lead the industry in comfort, quality and intelligent design. In an extremely competitive field, it is a testament to Fontaine’s talents that every one of his designs over 100’ has been nominated for or won awards presented by the internationally recognized association of yacht designers and builders, the Super Yacht Society.

Situated just sixty feet from the water’s edge, overlooking the east passage of Narragansett Bay, the Fontaine Design Group studio is based in one of the most legendary locations in America’s yachting history. Of particular note is the story of one man from whom Ted Fontaine learned the trade: Ted Hood. In the late 1950s Hood designed, built and demonstrated how his shallow draft heavy displacement hull form could win races when he designed, built and sailed his first Robin. In following years this innovative design developed steadily, and in 1985 one man became two, when Ted Fontaine was appointed Chief Designer of the Ted Hood Design Group. The next decade saw the concept refined, with a strong emphasis on the offshore cruising sailor seeking the optimum in both performance and comfort. Fontaine continued to lead the refinement of the Hood hull forms until 2001, when a consolidation of the Hood and Hinckley Companies created an opportunity for him to purchase the assets of the Ted Hood Design Group and begin a new company under his own name., Fontaine Design Group.

During the 1990s, Fontaine expanded the Group’s custom yacht design capabilities into other areas, specifically the superyacht market. Ted gained experience working with many of the world’s finest builders: the renowned Royal Huisman Shipyard in Holland where he built Pamina, Anakena and Surama, all winners of Super Yacht Society awards; Alloy Yachts of New Zealand where Savannah, Chimera and Paraiso were built; Holland Jachbouw, builders of the luxurious 116’ Whisper. 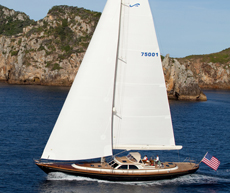 The Design Philosophy and How It Works

The current trend in yacht design is clearly towards lighter displacement, deep-keel boats designed primarily for high performance with a lower priority on comfort and, in some instances, safety. This has been driven in part by the new generation of racing boats that are designed with a singular objective to sail around the world (or the race course) in as short a time as possible. These extreme designs have placed a tremendous burden on mast and boat builders by allowing only the narrowest margin of error in balancing safety with weight-saving construction, sometimes with tragic consequences.

Oddly enough, some groups have ignored the old adage that says “you have to finish to win the race.”

The Fontaine Design Group stands firm in the face of this trend by offering a unique design alternative that emphasizes comfort and safety without giving up respectable performance characteristics. Today, the average cruising sailor wants to sail quickly from point to point, while feeling pride at the wheel when passing other boats of similar size. At the same time, they want to be self-sufficient for longer passages and retain valuable creature comforts. Before focusing on these benefits to the cruising sailor, let's first talk about performance.

Since 1959, Hood/Fontaine designs have consistently proven to be competitive on the race course. Some of these boats were designed primarily as racing boats under the old I.O.R. rule, while other boats were successful as racer/cruisers. With the advent of the I.M.S. rule over the past decade, we have put a greater emphasis on cruising requirements, both above and below the waterline, while at the same time striving to keep each boat competitive. For example, in each of the four Newport/Marion-Bermuda races from 1989-1992, a Hood designed “cruising machine” finished first in class, and in each case proving itself in a variety of wind conditions.

Looking at why Ted Fontaine’s boats perform well, we  focus on these important design characteristics: