Design 1106C is a note worthy design in that this 36' Catboat was the initial conceptual design prepared for what became the Friendship 36. The original design brief dictated an extremely shallow draft boat, the largest boat possible to sail in Moriches Bay which is located on the eastern side of Long Island NY.  The average water depth of the bay is three to five feet. Having been brought up sailing Beetle Cats on Buzzards Bay; designer Ted Fontaine envisioned a larger modern version of the proven shoal draft cruising cat boats typically found sailing on Long Island’s Great South Bay.

The following in an excerpt from the letter accompanying the initial conceptual design drawings prepared for the Friendship 36:

"Ironically, through my research of ‘the prettiest cat boats’ I found a designer / builder named Gilbert Munroe Smith; he was truly a gifted boat builder and designer of the fastest and prettiest boats to ever sail on the Great South Bay on Long Island. Smith designed and built many beautiful shallow draft cat boats…what I have found through my research is that the most important attribute of a Gilbert Munroe Smith designed cat boat was that it had to be not only a beautiful boat to look at it also had to be fast through the water. There are many famous images, photographs and drawings of his designs and each and every one of them is inspiring.

Given the mandate by the customer to design the prettiest, sexiest shallow draft sailboat possible one first should research prior art to determine what historically has already been done, in the initial design process we always do extensive research into “prior art”. It was interesting to note that what I found under the descriptive terms of “shallow draft, prettiest, sailboat” all seemed to lead back to Gilbert Munroe Smith.  It is interesting to note that Gilbert Munroe Smith made his living designing fast shallow draft boats for the Long Island community over 100 years ago. Apparently there was as much a desire for beautiful sailing yachts back then as there is now and his designs are definitely a positive influence on what we have created for you.

As I note that the key words of the design brief are “easy to sail, a tiller would be nice”, “sultry or sexy in appearance”, “fast, under sail and power”, “she is to have teak decks, teak cabin house and is to sit squat in the water like a duck.” The “systems are to be simple”, “she should have strong bow thruster” and “she should have adequate auxiliary power to safely navigate the Moriches Bay inlet against the tide.”

It was with these descriptive features in mind that I began to put pen to paper and create a conceptual sketch that would be sleek, fast, shallow draft, pretty to look at and simple to sail. I was inspired by the plumb bow designs from Gilbert Munroe Smith. The plumb bow has its roots in traditional designed cat boats as well as earlier commercial sailing craft, the longer the waterline length the faster the sailing speeds.

The new Friendship 36 has the same waterline length as the Friendship 40 indicating that she will indeed be a fast sailing boat for her overall length.  In designing the new Friendship 36 we purposely created a boat with less freeboard to bring those onboard closer to the water and to provide the “squat” appearance when moored.

Ultimately, the design customer choose to follow a design direction more closely related to his existing Friendship 40, “why try to fix something that is not broken” was the directive. While we then went down the path of a smaller Friendship 40, I wanted to include this sweet little cat boat, with a fixed draft of only 33” she would certainly be an interesting project for a later day. The final design is the F36, a mini Friendship 40, currently under construction at Rockport Marine in Maine, but the first concept was this beautiful, Gilbert Munroe Smith inspired Catboat. 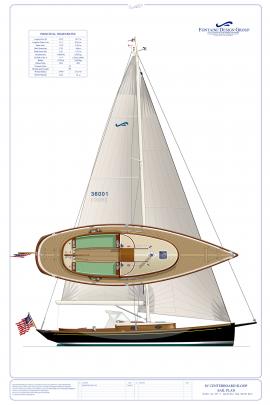 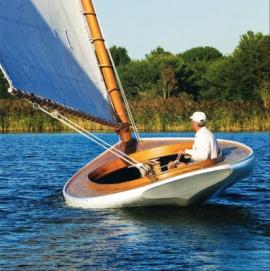