Anakena has clearly set new standards amongst sailing super yachts. In an unprecedented collaboration, three of the yachting industry's premier craftsmen have joined forces on a project that will result in a new standard of excellence. The Fontaine Design Group designed A 132' High-Performance Twin Centerboard Pilothouse Ketch and it was built at the acclaimed Royal Huisman Shipyard in Holland. John Munford, of Southampton, England, completes this prestigious team as the interior designer of ANAKENA.

The owner's choice of the Fontaine Design Group as naval architects in charge of the project was based on his first-hand experience with Ted Fontaine and his design group. Previous to the 132 project, Fontaine had meticulously redesigned and outfitted the owner's Swan 76' ketch, transforming her into an 82' custom sailing yacht. This proven expertise combined with Fontaine's experience and reputation in designing heavy-displacement boats with outstanding performance and shoal draft capabilities solidified his choice.

It was the owner's intention to build a boat that would be suitable for extended periods of remote worldwide cruising at sea with his family and a party of friends. Prime considerations were access to the mechanical spaces, the operational integrity of the yacht, complete privacy for the owner's party and performance and comfort at sea.

With the owner's parameters set, the Fontaine Design Group established the general space allocations for accommodations, mechanical and sailing systems and, in close collaboration with the owner, worked out the general arrangement for the accommodations. Initial plans were developed for a 100' design, followed by 106', 109', 112' and 117' before the owner was completely satisfied that the 132' yacht could accommodate his requirements for speed, comfort, reliability and good looks.

The 132 feet incorporates the successful characteristics inherent in Fontaine's design philosophy: a shallow-draft and a low-prismatic hull form capable of carrying heavy loads without loss of speed. A stable, seakindly platform was arrived at by designing a deep, full-bodied, shallow-draft hull, which incorporates a partial keel with semi-balanced rudder, a deep, hydrodynamically designed centerboard which provides 19' draft for superior windward performance and a second aft centerboard for directional stability for open ocean passages compliment the unique underbody. This hull form is typical of the race-winning Fontaine hull designs in that the design minimizes wetted surfaces and maximizes wave-making length while providing stability with beam and ballast.

The deep-bilged, low-wetted surface hull shape allows for the installation of main engines and mechanical equipment to be as low as possible. The 8'6" draft provides for an engine room with full standing headroom (6'6") throughout its 28' length, thereby satisfying the owner's requirement for a motoryacht-type engine room without the high coach roof height of other similarly sized sailing yachts.

The Fontaine Design Group, Royal Huisman Shipyard and John Munford each garner the respect of the sailing community in their own right. Combined, the artistry and craftsmanship displayed in this vessel will set a new standard that others will attempt to emulate for years to come. 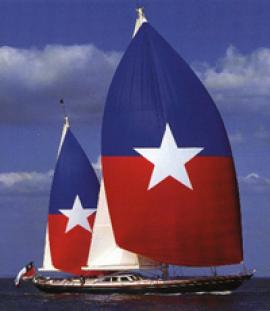 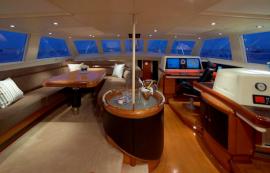 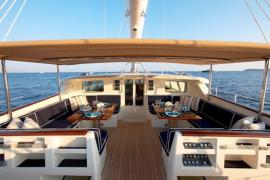